What types of automatic spraying equipment are the

Type of automatic spraying equipment
1. Horizontal reciprocating automatic spraying machine
The spray gun of the horizontal reciprocating automatic spraying machine is perpendicular to the coated surface of the workpiece, and can spray the flat workpiece such as steel plate and plywood conveyed by the conveyor belt. The horizontal reciprocator combines with the trajectory of the conveyor belt to travel a series of "W" shaped spray trajectories. In order to obtain a uniform coating, the identification coating stroke system consisting of a single photocell automatically controls the coating stroke. It can be combined with a horizontal conveyor to form an automatic coating line. The advancement speed of the conveyor belt should match the stroke of the horizontal reciprocator to maintain an overlap between the coatings between the two adjacent strokes of the spray gun. Therefore, if the spray width of the spray gun is 15cm, the workpiece should advance 7.5cm for each one-way stroke of the spray gun, and the spray gun should be released when the spray gun leaves the workpiece edge 15cm.
2. Vertical reciprocating automatic spraying machine
The vertical reciprocating machine produces a vertical spray stroke, which is often used in conjunction with a suspended conveyor chain. Thanks to the use of frequency conversion technology and digital control technology, the performance can be greatly improved. The vertical reciprocating stroke distance can be adjusted from 650 to 2050 mm, and the reciprocating speed can be adjusted within the range of 15-60 m/min. Control of the spray width is accomplished by setting the travel signal and automatic control of the spray gun. Since the starting point and the end point of the stroke can be separately controlled from the starting point and the end point of the spraying, the adjustment of the spraying width is realized, which saves the paint and reduces the pollution to the environment.
3. Rotary sprayer
The basic operation mode of the rotary sprayer is the same as that of the horizontal reciprocator, but the conveyor speed of the conveyor can be faster. The rotation speed of the rotary sprayer can reach 20r/min. Under the action of the rotary sprayer and the conveyor, the paint travels on the surface of the workpiece. A series of small sectors that overlap each other. The flattening of the fan-shaped droplets of the stroke, the more uniform the coating obtained. The greater the number of guns on the rotary sprayer, the faster the transfer speed can be achieved, such as a rotary sprayer with 4 spray guns, with a transfer speed of up to 1524 cm/min. For example, a rotary sprayer with 8 spray guns can deliver higher speeds and better spray results. It should be noted that abrasive coatings cannot be sprayed due to the installation of rotary seals on the sprayer.
4. Triaxial side sprayer
The nozzle of the triaxial side sprayer has three degrees of freedom for up and down reciprocation, back and forth motion and swing in a vertical plane. Through these three modes of operation, it is ensured that the nozzle is kept at an equal distance from the object to be coated at any point within the stroke, and the nozzle axis is perpendicular to the surface of the object to be coated. The best spray quality is achieved because the nozzle maintains a good nozzle distance and angle.
5. Multi-axis top sprayer
The nozzle of the multi-axis top sprayer is mounted on the beam supported by the shaft column, so there are three degrees of freedom of spraying. The nozzle can reciprocate along the beam, and the beam can reciprocate up and down along the main column. The nozzle can be swung and along the beam. The main column is combined with the up and down movement, so that the top surface of the painted part and the front and back of any surface can be finished.
6. Shaft equipment
The rotating shaft device is also an automatic spraying system, which is characterized in that the workpiece conveyed by the conveyor belt is placed on a special fixture, and is rotated or flipped in front of the spray gun by the rotating shaft. In order to make the coating uniform, the workpiece is in front of each spray gun. Rotate for at least two weeks. This device is particularly suitable for spraying spherical or cylindrical workpieces. The spacing between the fixtures is selected based on the shape and size of the workpiece. The smallest spacing is the spacing between two adjacent shafts. The spacing can be increased as needed.
7. Painting robot
The painting robot is a sprayer that is controlled by a computer and that is used on the spray line to mimic the complex movements of the human hand, wrist and arm. Because it has 5 or 6 axis degrees of freedom, it can be painted in any spatial position. It is especially suitable for use in hazardous situations instead of manual work and repetitive work to reduce the labor burden, and can do very fine spraying work. The action of the painting robot is done electrically or hydraulically. Instead of manual spraying, the coating robot has been widely used in automobiles and other industries. 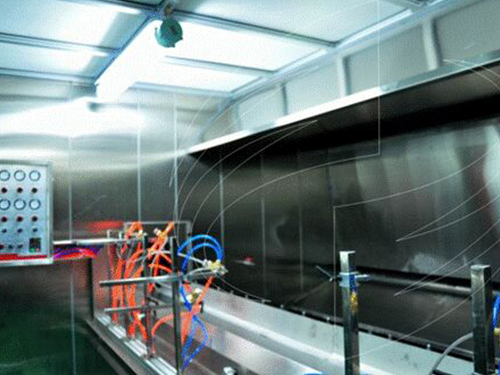 上一条:Guiding ideology of coating line process design
下一条:What are the classifications of conveyors in the c
相关标签：